The Fairytale Of Rupak Chatterjee

Everyone is chattering about Chatterjee – Chatterjee Productions that is.

But before we get into the logistics of a production company startup – let alone one that is trying to bridge a cultural gap between East meets West – let us first start at the beginning; the humble beginnings of a man from India.

Rupak Chatterjee was a bright young engineering graduate from one of India’s most renowned institutions – Jadavpur University. Like many within his faculty, he was able land work quickly and began his career in Machine Design and Assembly Language Programming. He handled offset printing and gravure presses, but even this early on he felt a higher calling coaxing him away from menial machinery. He soon lost interest and set his sights on something more – something relating to computer science and technology. So, he shifted his home base from India to Singapore.

In 2001 Rupak immersed himself in the advanced learning of software design and development. Again, given his tech-based studies and hands-on experience, he was gainfully employed this time in Singapore’s telecommunications sector. His key focus areas were software automation, code modification, business development strategies & techniques – but again, his sponge-like ambition eagerly awaited more.

He wanted to take a deeper dive into integrated business, a plunge that would ultimately lead to his discovery of an advanced software tool called “Systems Applications and Product Design”, known more simply as SAP. With this newly acquired knowledge he moved back to India to pursue additional SAP training & certification in 2003. At this point, with all of the moving, travel, and investments in continued education, Rupak found himself nearly destitute. Still, he packed whatever resolve he had left and desperately sought further personal development; he took-off once more to Hyderabad, Telangana for a special session in Business Objects and the Business Information Warehouse.

After several self-deemed sufficient SAP training sessions, Rupak migrated to the United States to implement his newly acquired skill sets into various Fortune 500 companies. It was January of 2004 in New Jersey, during the dead of winter, and the man from the warm, familiar yet faraway homeland of India managed to find himself a guest house to live in. The endless grind was all he knew however, so despite only having $300 in his pocket he scrounged up enough cash to claim more qualifying degrees that would eventually open up the job market further. He worked with top consulting companies, developed close relationships with many topnotch customers, all of which triggered an epiphany: he formed his own company, Chatterjee Solutions, with McCormick & Company as his first client out of Los Angeles. Little did he know his work ethic that had taken its toll on him financially would one day lead him to the silver screen where he would bolster the Tollywood industry.

While Chatterjee Solutions is one of the strongest members of SAP America as a Gold Partner, Rupak’s production company Chatterjee Productions is still infantile in its existence. Much like the neophyte who left India for Singapore and eventually the U.S., this endeavor has barely gained enough traction to tout alongside its Bollywood big brothers. You see, “Tollywood” predates Hollywood, and pertains specifically to the Bengali film industry. Rupak always had a love for film, and his friends encouraged him to chase after his Hollywood dream. What Rupak aims to do is pair his newer Hollywood surroundings and influences with the older Tollywood staples of back home, so as to legitimize the films with grit and make them more tangible for modern and Western audiences.

Wanting to take Bengali films by storm – steering them away from their dance routines and song numbers typically attributed to India’s more widespread filmic genres – Rupak is striving to generate more of a Bengal buzz so to speak with his Cinema Carnival happening on July 27th at the Furjanik & Sandberg Auditorium. At this cultural exchange event, he will premiere Chatterjee Productions’ first film Another Fairy Tale. With a tagline like “Could they suppress their young, adolescent emotions into oblivion?” the film’s plot clearly denotes that Rupak’s journey from SAP to the pursuit of sappiness has come a long way.

From tech startups to jumpstarting a foreign film industry, Rupak clearly has his work cut out for him. But, if his conviction thus far has proven anything, it is that with the courage to take chances and the gumption to continuously grow, he can – and will – achieve anything. And with the premiere of his upcoming feature, we shall see if indeed a man can write scripts as well as he writes code. 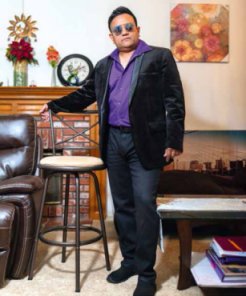