The Muscel region is located in the centralsouthern part of Romania, on the upper valleys of Dâmbovita River, Doamnei River and Târgului River, beneath the heights of the Fâgâras, Piatra Craiului and Iezer Mountains, making it an area with ones of the most interesting ethnographic features of the country. Taking its name from “muscele”, soft and low hills, Muscel region was the hearth of one of the first Romanian state formations. The proximity of the town Câmpulung, the first capital of Romania and the area’s connections with Transylvania, created early opportunities for its economic development. Sheep raising, fruit growing, forestry and the practice of various crafts were the specific occupations of the inhabitants in the area. Surrounded like a fortress, with the stone walls of Piatra Craiului, Iezer and Fâgâras Mountains, the old Muscel has indeed a beauty – smooth and rough at the same time, composed of blue sky, stone and eternal green pastures, hard to resist. As hard to resist as the people from Muscel, mountain people, extremely hardworking and brave, who have sealed the area with their beautiful well-groomed settlements with traditional architecture, respectfully preserved.

Mountains, Mysteries, and the Way to Heaven: Famous for the breathtaking unspoiled mountain landscape, the Arges and Muscel area is guarded northwest by the Fagaras Mountains, which host eight of the highest mountain peaks in the country, the first three being Moldoveanu, Negoiu and Vistea. The harsh climate, altitude and precipitations offer a fascinating spectacle of mist valleys, which magnifies the abysses to fantastic dimensions, giving magnificent outlines o the crests.

Its highest peak is Moldoveanu Peak, 2,544 meters (8,346 feet), which is also the highest peak in Romania’s mountains. Regarding this spectacular and serene mountain peak, it is known that it was named after the nickname of the shepherd who had rented it hundreds of years ago, when only shepherds climbed these mountains: Moldoveanu. Another trivia fact related to the area is that another shepherd named Bucur gave the name of Bucharest to the capital of Romania. It is said that in the tunnels in the mountains, generations of rulers hid treasures. They all inherited a treasure, and was their duty to increase it. They were not allowed to touch these riches. The mysterious treasure of Romania has never been discovered.

Another legend says that in the mountains of Romania there would be a gateway to another world called Path to Heaven. Several researchers have studied the area and found in the mountains a one-kilometer slope loaded with atypical magnetic energy, which can be assimilated with the Path to Heaven from the Romanian folk tradition. It is said that this Path to Heaven is an area where a connection is created between heaven and earth, between man and divinity, a kind of road to Heaven. 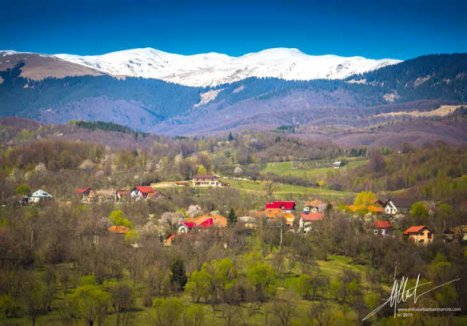