Bernard Bullen was born in Madrid. His father is British, which allowed Bernard a bilingual (English/Spanish) education. That would be the biggest gift of his life as it allowed him to launch an international career.

Bernard is currently starring in the daily drama series BETTY IN NEW YORK on the Telemundo Network, based on the 1999 Colombian telenovela “Yo Soy Betty La Fea.” Bernard plays the leading character Joaquín de Quiroz, a nasty Spaniard who is the antagonist. The series began in February to critical acclaim and high ratings. This opportunity has opened the doors for Bernard to do more TV in the U.S. and around the world.

Bernard recently starred in the Spanish-language feature comedy ¡HE MATADO A MI MARIDO! (I KILLED MY HUSBAND!), playing KIKE, his first Spanish character in the U.S., a flamboyantly fun character playing along major international stars like Maria Conchita Alonso, Assumpta Serna, Gaby Espino, Eduardo Yañez and Alicia Machado, among others. The film opened in March 2019 in theatres across the U.S., Aruba, Dominican Republic and remained for over a month.

Bernard is preparing for a dramatic role in the upcoming Star Wars saga The Mandalorian, a dramatic character that demonstrates Bernard’s ability to perform both drama and comedy.

His U.S. film credits also include THE LOVE WITCH, BEST MOM (Winner of two Hollywood Independent Reel Awards) as well as COYOTE and CARETAKERS which will premiere in 2019.

Bernard began his career as a model in Spain and other European countries but acting was always his passion. He attended drama school where he was cast in a tour with Spain’s Classic Theatre TAMUR. He then starred in his first television project and worked on the series HOLA! Que Tal? For three years before moving to London to join the prestigious Speech and Drama Central. While in London, he worked on the feature CAPITAL for French director Costa Gavras and the TV series’ SOMBREROS and MIDSOMMER MURDERS. In Italy, he starred in SQUADRA ANTIMAFIA 3 and in Colombia on the series LA PROMESA. He moved to Los Angeles in 2015. 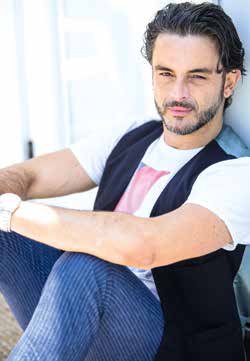